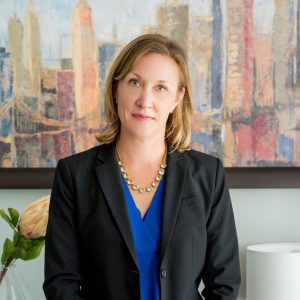 Rebecca Clark became the President and CEO of Anixter Center in January of 2018. She joined Anixter Center in October of 2015 as the Vice President of Program Quality, Growth and Accountability, where she oversaw multiple lines of programming at Anixter, emphasizing the use of data to drive decisions about high quality programming, fiscal balancing, and program modernization. In her role as CEO, she continues with those priorities as Anixter celebrates its 100th year as a service provider in Chicago.

Prior to joining Anixter, Rebecca spent over 12 years in administration at Chicago Public Schools. Her initial work at CPS was supporting the CEO’s Office in using data to develop a 5 year education plan for Chicago. More than 8 years of her time at CPS was spent in the special education department, leading high quality, outcome driven teams to support over 700 schools that served Chicago’s children. She led the district to successfully exit federal court monitoring from a settlement agreement that took nearly 20 years to implement. She also led the successful effort to ensure all services moved with the children receiving special education services when the district closed 50 schools, including more than 20 schools with programs for student with the most significant needs. Through her leadership, the district was able to show all students transitioned successfully with all services intact, fending off 2 new federal lawsuits that were filed to show otherwise.

Back to Leadership Page